During my quest to reduce our household's electricity consumption, I noticed that our 20-year-old fridge's compressor seemed to be running quasi continuously. As this was a rather clear indication of an inefficient appliance, we decided to swap it out for a new one. I somehow managed to convince my wife to postpone our purchase by a few weeks so that I could hook up a Fluksometer to the old fridge. I also monitored the new fridge to do some benchmarking. In a previous post I already mentioned that we were able to reduce our average nighttime electricity consumption from 130 watts to around 80 watts by swapping this 20-year-old fridge for an new 'A' labeled one. Here's a more detailed chart displaying the collected data over a 24h period. 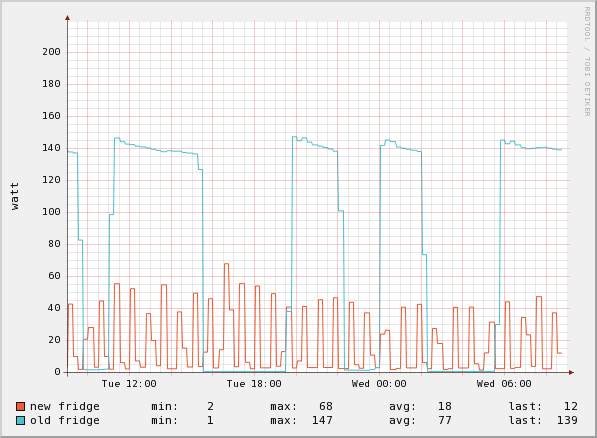 You can clearly see the old fridge having only four cooling cycles during this particular day, lasting between two to four hours each and consuming approx. 140 watts peak. The new fridge's data shows a more repetitive pattern with one to two, shorter cooling cycles per hour and power consumption mostly well below 60 watts. Extrapolating these measurements to a full year would result in our old fridge consuming 671kWh/year while our new one will only draw 161kWh/year! Money-wise this translates into running costs of 120EUR/year and 30EUR/year, respectively. This means our new fridge will have a payback period of less than four years.

This benchmarking exercise once again shows that negawatts, electricity that isn't created due to energy efficiency, can contribute significantly towards a greener life. In this specific case it doesn't require any behavioural change in our household whatsoever. With the new fridge in place we expect our five-person household to draw less than 2000kWh in 2010.

It would be interesting to investigate what the increase in consumption would be if you don't de-freeze your fridge regularly...
Difficult to measure though… you'll have to flat out seasonal effects.
Jo

The fridge's two-hour on-time points to a malfunctioning compressor. If I understand correctly, your fridge is now consuming 125W on average? That's almost double the consumption of my old fridge. Payback time of a new fridge would be less than two years!

Yes, you can check out my meter feed, it's public. The base load of 100W is my desktop pc, spikes are mostly the dishwasher/laundry/iron. The repetitive pattern is the fridge, confirmed by switching off the unit for a few minutes so the Fluksometer would notice.

I dug out the operating manual and the unit is spec'd to use 1.1kWh daily. Measured consumption is 3kWh. Looks like shopping season has begun, oh joy.

I've subscribed to your Fluksometer stream. Indeed, the repetitive pattern of 2-on-2-off hours looks like a very inefficiently operating fridge. You've conducted a good analysis of your graphs.

The cabinet that holds the recessed fridge does _not_ have the venting holes recommended by the fridge's manufacturer. Could it be that the compressor is running fine but the insufficient air circulation is responsible for the extra work?
(EDIT: according to the builder this doesn't change much, the fridge has bottom venting holes and a gap behind it)

I've been told that such a fridge sells for upwards of 1000EUR which means many years payback time: 3kwh/daily instead of 1.1Kwh/daily at an average price of 0.15 EUR/Kwh add up to 110 EUR/year. An A+ class is rated at 300Kwh/year (i.e., less than 1.1 daily) but the calculation doesn't change much.

A 1000+ EUR fridge. I recon you are talking about what is typically called an American fridge?

Nope, a recessed fridge, i.e. one that is hidden inside the kitchen furniture. Prices start below 1000 EUR, then you have to factor in the removal of the old unit and fitting of the replacement, hence the total cost I quoted.

EDIT: it would appear that the fridge has finally given up: yesterday evening I performed an emergency de-icing (the whole unit was a large ice cube), cleaned it up and restarted it, with the freezing bay empty. I see now that it is running continuously and that does not bode well.

A very interesting discussion and the charts also. But wouldn't it be nice to have a weekly chart to observer thes "middle" time changes!? This might be also good for detauled comparisons of weekdays and weekend power consumption.

What do you think about?

I have similar to your graph. Old Frigidaire and now new 430 litre Electrolux :)

What brand/model was your old/new fridge? I am investigating the following fridge for 240volt solar set up:
http://www.ebay.com.au/itm/NEW-HUGE-DC-250-LITRE-CARAVAN-CAR-FREEZER-FRI...
The only information the ebay company has given is 78watts on motor start up and then a constant 60-70watts after that all day. But per your graph, I assume that the fridge must turn off and drop to near no watts at certain points in the day? He cant tell me annual kWh usage either!