Being inspired by Bart's blog on the watermeter, i wanted to try it myself. I live in the Netherlands and have a watermeter from the company presikhaaf, i could not find a type number. Perhaps someone recognizes the meter from the photo. 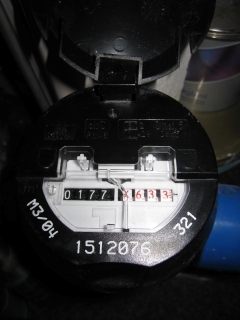 Unfortunately my meter does not have a small opening for hall sensors as Lieven had, this already made me a bit worried. To test my meter I made a smaal setup using components from phidgets. They have easy to use analog input devices and a hall sensor board containing a Allegro A1321 hall sensor, not a hall switch! Using the api from phidgets i made a small java program to draw a graph of the signal. Testing with a magnet showed nice graphs.

Using this i went to the watermeter, opened a tap to let some water flow and started to move the sensor around the meter. Nothing :-( Where ever i put the sensor, in any direction, no clear signal. So no luck for me. To be absolutly sure i bought a real hall switch, i could not find the A3214 Bart and Lieven uses, but instead use the TLE4905L which is also a cheap hall switch. A few components according to the datasheet, i made my own sensorboard. But again, no luck in measuring any magnetic activity around my watermeter.

Being near the gasmeter too, i held the hall sensor and the hall switch also to the gas meter, again no luck. it seems that at least my Dutch water- and gasmeter are not equipeted to be measured via hall sensors.

The gasmeter though has a spining wheel with white and black stripes, i want to see if i can make a optiocal detector to see that movement. The watermeter also has a small wheel in the center, but that has no color stripes and i do not think i can measure that optically.

So no luck for me, but perhaps someone else can use my experiments to see if they do have a magnetic capable watermeter and/or gasmeter.
The watermeter could perhaps be monitored using the microphone. Anyone some ideas about that? Especially some easy software to process the signal.

‹ Hacking the Fluksometer - It's a mote! power measurement ? ›

I seem to have exactly the same 'Presikhaaf' watermeter. Since I could not find any specs on the web I thought to give them a phonecall (www.presikhaaf.org). They confirmed me that there is a magnet located in the counter of the most significant digit.

Furthermore they told me that the a sensor should be placed in a cavity which can be reached by removing the small black plastic flap located slightly above and to the right side of the most significant digit.

I'll give it a try with an old-fashioned compass first, before irreversible changing the watermeter.

Just checked the Presikhaaf meter with the watertap running. And yes, the needle spins, each revolution of the last digit.

Could you make a close-up of the cavity to satisfy my curiosity? Could you also determine the meter constant of the Presikhaaf?